There were a lot of crafts and projects completed this summer.  I'm not lying.  I swear.  But I really suck at documenting our accomplishments.  I stained the fence and the swing set but have no proof.  We ripped out part of the deck and rebuilt the remainder and stained it.  We landscaped many, many, many square feet of flowerbeds, vegetable gardens and a bunch of potted plants.  Here is the proof.  We suck at documenting before and after shots:(

Here is the proof that I do have.  Seriously, be patient.  The comparison is very random.  Guys, this is going to be a real challenge if you've never been to our house, because the before and after pics don't match up.

This is the best BEFORE picture I could find.  There's the picket fence I repurposed in last week's post.  Also notice that the left part of our deck had fencing for railing.  The previous owners were clueless.

This is where we are after a few days of work.  We removed all the railing, steps and lattice and started to remove the flooring on the left, lower portion.  This portion we eventually removed completely.  The deck was much too big and made for a very awkward space.  We also constructed a temporary fire pit close to where the permanent one would go.  Men love to burn things.  I don't really share this love, but I respect it.  So, now we have a fire pit. 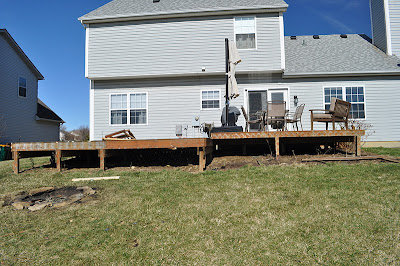 Then, there was a break.  A three week break that you may be familiar with.  Three weeks later we were back on track and had removed the entire foundation of the left portion of the deck, plowed the dirt to make a large garden and began assembling the new railing and steps.  I have no "in progress" photos to share of this phase.  We were rushing to prepare for Jonah's birthday and for Adam to start his new job.

So skip forward to sometime in June.  The fire pit is complete.  The railing is up on the deck.  The large walking garden is [kind of] finished but will take a few years to completely fill in.  The steps are done.  We did get most of it stained before leaving for California but we, of course, have no pictures of that.  Here's what we do have:

Sorry for the confusion.  We'll do better when we start on the floors and kitchen in January!
at 1:39 PM 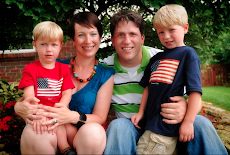